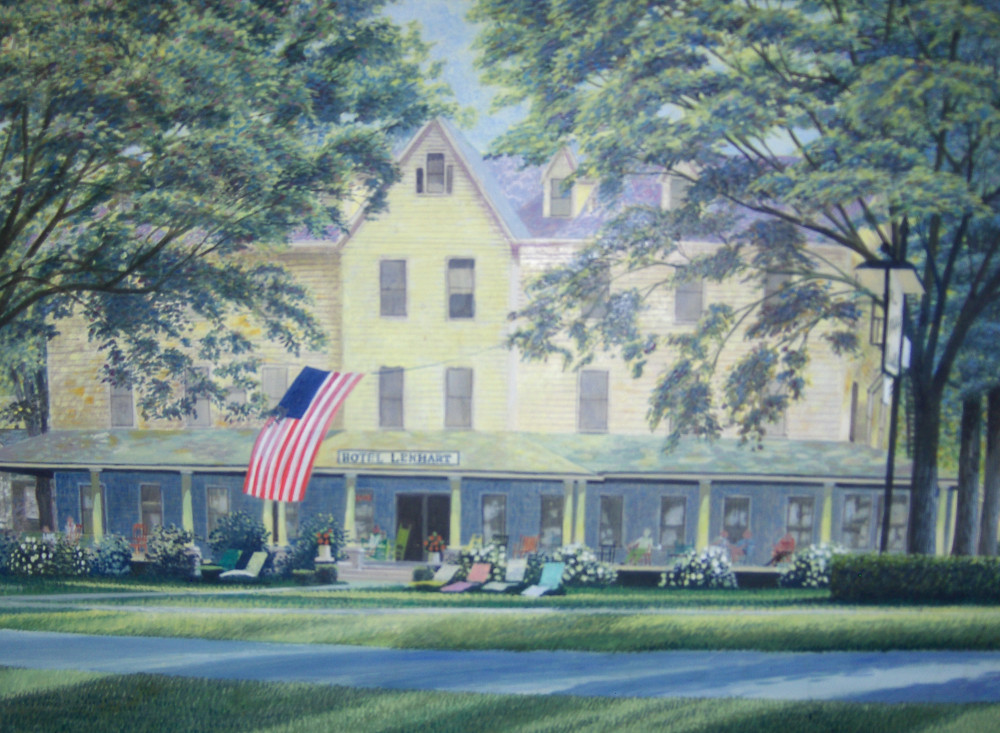 It was indeed a privilege to stop by the Hotel Lenhart which celebrated its 134th year in 2014. To say that this well-known establishment is celebrating a rich history would certainly be an understatement. While it’s true that we didn’t have the time to stay overnight or dine in their chic restaurant on this spare-of-the-moment occasion, but we are planning to do just that in the very near future. However, the manager did take the time from his busy schedule to show us around and therefore, enrich us with colorful stories from the hotel’s rich history. In the future, I’m planning on telling the entire story to my readers. Yet, at this time, I’m happy to share the story about their well-known apparition.

Several photos show a rather large party going on when the participants decide to line up on the stairway for a group picture. One shows the apparition standing at the top of the stairway while another photo shows an empty space. By the way, no one knew the woman (apparition) in the picture and it shows that she didn’t have any eyes. It’s a mystery that’s been investigated, but, has not been solved to this day; more on this location in near the future.

It felt good returning to the Pontoon Boat, what wasn’t so good is the fact that it was in the middle of a dark night. It wasn’t a scary situation, because, Captain Bob is a seasoned captain and Darcy is a seasoned First Mate. First of all, Darcy provided Gloria and I with warm comfortable blankets and then served as the captain’s lookout; the same as when she helped him dock the boat by jumping out and tying it to the dock. Bob again played the enchanting music while standing up and dancing as he drove the boat towards home. It was definitely an evening that we won’t soon forget. So, I guess you can say that the four of us partied all the way home to the lake house and it wasn’t a problem ducking down when we once again passed through the canal bridge. All the time, Darcy’s wonderful tunes played on.

Choosing to stay a second day, Bob and Darcy decide to drive us in his car to the Watermark Restaurant and we’re both so glad they made that particular decision.