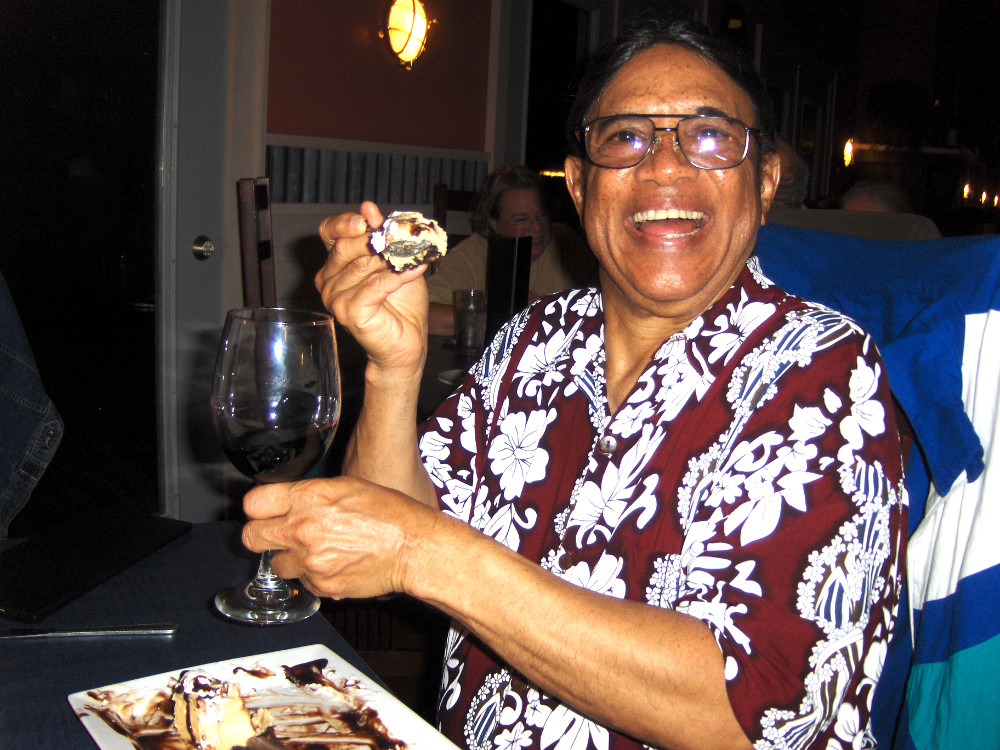 Our arrival at the Watermark Restaurant presented us with a crowd patiently waiting for a table. This dining spot is open daily from 4:30 pm to 9:30 pm. It seems that the Chautauqua Institute was having a special event that day. There were people waiting in line at the restaurant and they had additionally filled both the Chautauqua Institute and the town of Mayville. Having to wait gave us a chance to converse with other would-be diners.

Making Friends At The Watermark

One person I met was a programmer at a Massachusetts television station who was in town to attend the event at the Chautauqua Institute. I even found it much easier meeting people when having a cocktail at the bar while waiting for a table. After all, a few cocktails loosen the friendly tongue and at the same time introduce people from one end of the country (or world) to the other side of the country. By the way, their bartender was a delight; if I have to wait to be seated at my table, then please, allow me to be entertained by an intelligent veteran bartender, and we were.

It didn’t take that long to be seat at a table for four by the window, but believe me, the four of us were more than happy once we were seated. In no time at all, our waitress promptly appeared out of nowhere, presented us with menus, and at the same time took orders for beverages. I remember commenting to the others at the table about how fast the service is, considering the crowd.

First, we chose to split two appetizers into four portions. The Crab Dip (a luscious sweet crab dish baked with bubbly and served with baguette ($9.50) was perfect for a first selection. It was sufficient and satisfactory, but should have used a little less salt. But, that’s to my liking and this is my opinion staying true to the course. Still, it was satisfactory and appreciated.

A second appetizer, the Bruschette (included a mix of diced Roma Tomatoes, fresh chopped garlic and Italian herbs served on ciabatta topped with asiago ($9.95), was delicious.

Two of us at the table ordered soup, Cream of Crab Soup ($7.50), a Watermark specialty and Gazpacho (a classic chilled soup made from fresh tomatoes, diced cucumbers, red and yellow peppers, and onions. It’s pureed with fresh herbs and topped with a cucumber avocado salsa ($6.75). Both soups were tasty and provided additional flavor to our dining.

Next, the four entrees appeared and just looking down upon each plate that was lying on our table, created an unbelievable scrumptious smell of artistic preparation that would make any chef or diner proud to be involved with such an experience. Both Darcy and I had ordered the Red Snapper ($24.95), which produced a Snapper fillet topped with Panko bread crumbs and then baked. It’s served with house rice and an artichoke cream sauce. This dish is certainly the” Main Performance,” of any evening. It was simply outrageously superb, every single tasty mouthful and to be honest, I became personally offended watching it disappear between bites. My palate wanted more and I definitely agreed with my palate.

Glorietta had ordered the Sea Bass and found its taste and freshness to be her delight. She said that it tasted like more. She also wanted more and informed the other three diners at her table of this fact. The combined laughter broadcasted around our table in sweet harmony.

Bob ordered the Black and Bleu Strip Steak ($28.95) and immediately announced it to be outstanding. With Cajun season seared into the steak and then topped with bleu cheese sauce, the rest of us could only watch his mouth water as he took his first bite. As you’ve probably surmised by now, there wasn’t much conversation during dinner. I personally believe it’s because Bob had become afraid that one of us would ask for a taste. Of course, no one asked but, you can rest assure that there were four busy mouths chewing away to their heart’s content.

EDITOR’S NOTE: All entrees are served with a garden salad.

I became the only diner from our table to order dessert, the Mississippi Mud Pie. If you gaze at the picture that I’ve included, I’m sure you already understand what I thought of The Watermark’s dessert. HMMM! I’m also certain that you won’t be surprised when I tell you that Glorietta decide to do me a favor by helping me devour it. Oh, I emphatically just thanked my lucky heavens.

Conclusion Of The Watermark & Friends

On the drive home everyone playfully argued about what entrée had won the night. Naturally, it was the Red Snapper and you can take my word to the bank! Why would I lie about it? The next day, we packed our belonging and loaded our vehicle and then sat down for a glorious breakfast. Afterwards, we hugged and said our goodbyes, then, regretfully rode away down the highway towards Pittsburgh. The discussion back and forth while we traveled was respectfully funny. This is one of the special stops on our three 2014 journeys to 38 states. We spoke of our love for Western Pennsylvania and for Bob and Darcy; our love for their lake house, their friends, and Chautauqua Lake. After all, they don’t call me Mister Tito “LUV” for nothing! Ciao